A 2.4 kilowatt photovoltaic system was installed on the Kelley Engineering Center during its construction in 2004. While this relatively small system provides a fraction of the power this large commercial building needs, it demonstrates the feasibility and output of solar resources in the Willamette Valley.

A 1.1 kilowatt array at HMSC in Newport demonstrates, renewable energy technology to visitors and reflects OSU's commitment to education in sustainable practices. HMSC has also implemented campus-wide energy conservation upgrades including the installation of an energy-efficient lighting and heating/ventilation system that resulted in a 15 percent decrease in electrical consumption.

The OSU Solar Trailer is a portable device that captures and stores solar energy. Its purpose is to educate about photovoltaic (solar electric) energy technologies and provide a quiet, renewable, portable power supply for events. It was designed by OSU students as a senior project in mechanical engineering and constructed in 2007.  The Student Sustainability Initiative provided about $30,000 in project funding in addition to over $20,000 received in product donations and discounts from RJH Enterprises, Outback Power, Smith Glass, MK Battery, Wattsun, Abundant Solar, and Freebird Body and Paint.

The device provides electricity to campus and community events such as Earth Week, the Beaver Community Fair, da Vinci Days, Fall Festival, Oregon State Fair and others.  Because of its on-board battery system, the Solar Trailer can also power electrical loads at night.  Power duration for large loads is extended during the day, and most small loads can be powered indefinitely.  The batteries are the limiting factor for large, long duration power draws, but large temporary loads up to the circuit ratings below are no problem.  The Trailer can also be available for emergency dispatch to wherever remote power requirements may exist.

In 2012, the Solar Trailer received a major battery technology upgrade.  In 2013, the Sustainability Office and Student Sustainability Initiative took the advancements even further by contracting with local company Shift Electric Vehicles to install an on board level 2 electric vehicle smart charger.  This charger greater utilizes the Trailer's improved battery capacity and innovatively promotes more sustainable transportation.

Need visible, renewable, portable energy for your event?  Fill out the Solar Trailer request form or find the Trailer on Facebook! Fees are charged to cover labor and a vehicle needed to operate the Solar Trailer.  The fee is determined by the location of the event, the number of days required and the number of hours used for set up and tear down of the Trailer.  Please see the Fee Book for more detail, or submit a request form indicating you'd like an estimate of fees for your event.

In June 2009, the Solar Trailer was used to charge a campus visitor's Tesla Roadster, illustrating that transportation fuels can be renewable too. 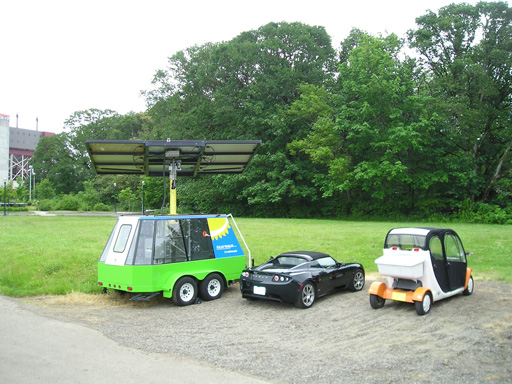 The bike generator is a human powered device with a stationary electricity generator, a small 12 volt battery, and a 1000 watt inverter. The bike also has an energy monitor that displays information like power produced. The bike generator can be ridden without disassembly to events, making it a highly efficient, carbon neutral operation!

The bike generator's purpose is to produce renewable electricity for small devices and serve as an outreach resource to inspire energy conservation and efficiency. It has powered sound systems, fridges, freezers and cell phone charging stations at events.

Total cost for the device was around $1,900 and included the generator, battery, charge controller, energy display, inverter and assembly assistance from Shift Electric Vehicles in Albany, Oregon. Making your own is possible, as most of these parts are sold commercially and there are some pre-assembled versions as well.

The 1000 watt inverter converts direct current (DC) from the generator and/or battery to alternating current (AC) for everyday items. Although the bike and battery can only produce constant outputs of up to around 350 watts, the 1000 watt inverter handles surges from motor-driven devices like refrigerators.

The power produced varies with how fast the rider pedals and how hard they push. This power can then either be used to directly power the inverter or charge the battery. The inverter provides high quality, constant 120 volt power, making it safe for all standard 120 volt devices.

Switching the battery into the circuit while riding assists the cyclist and allows the bike to power larger loads more consistently and for the rider to take short breaks. With no rider, the battery can power small loads for short times, but is primarily used to smooth the power output. Whenever the demanded wattage is less than what the bike generator is producing, the excess power goes into charging the battery.

Riding the bike at a comfortable pace will produce somewhere around 30-75 watts that can be sustained for as long as the biker can pedal. Increasing the electrical load increases the resistance that the rider encounters and therefore the amount of force that is required to rotate the pedals.

To request the OSU bike generator for your event, please contact us!

Since in 2012, 5 large ground-mounted solar electric (photovoltaic) arrays have been installed on agricultural lands operated by Oregon State University as part of “Solar by Degrees,” a large-scale photovoltaic power program coordinated by the Oregon University System.  OSU was the first to install and have operational its solar arrays.

The five arrays cover more than twelve acres combined. Three are in Corvallis two are at OSU properties elsewhere in the state. The 35th Street site is the largest, at around six acres and 1,435 kilowatts. It can be found west of the Corvallis campus on the Campus Way bike path. The 53rd Street site is 289 kilowatts and is located adjacent to the bike path just east of the Benton County Fairgrounds. The Aquatic Animal Heal Lab site, with a capacity of 482 kilowatts, is located adjacent to Trysting Tree golf course just east of the Willamette River, off the main campus.  Check real-time monitoring and see more information. 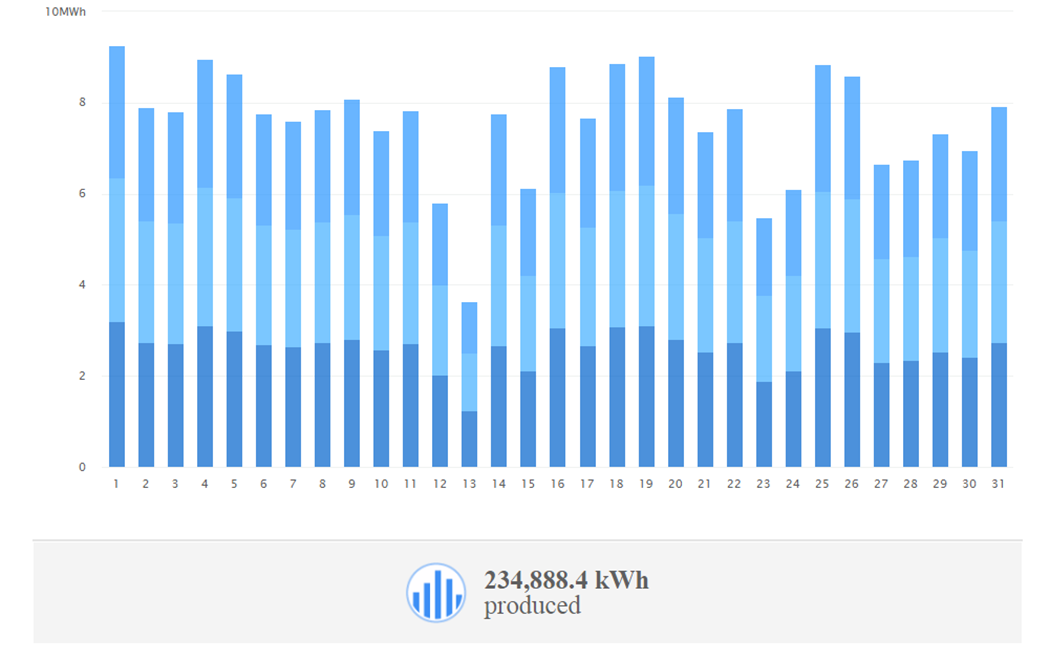 For several years, OSU purchased large amounts of renewable energy certificates (RECs) to offset its electricity use.  A student fee of $8.50/student/term, approved April 27, 2007 during the general election, supplied funding for this purchase between 2007 and 2010, and in 2011 OSU administration made the purchase as students elected to spend their fee money for on-site systems. Since 2012, OSU has made much smaller investments in offsite renewable energy, choosing instead to focus on development of on-site renewable resources.

Following a 2006-2007 campaign led by ASOSU Environmental Affairs, the student population approved the fee with 70% of voting students voting in favor. The campaign consisted of a fall 2006 survey revealing that 68% of students supported a fee, followed by a winter term petition collecting signatures to include a renewable energy question on the spring general election ballot. Over 1,700 students signed the petition in just a few days.

The US Environmental Protection Agency has recognized OSU multiple times for outstanding leadership in renewable energy use. In October 2008, Andrea Norris who, as a student, led the campaign for the renewable energy fee and now works in Campus Recycling, accepted on OSU's behalf a Green Power Leadership Award in Denver, Colorado.

In 2011, OSU purchased enough renewable energy to meet nearly 100% of its electricity needs and was the 5th largest college or university purchaser of renewable energy in the nation. It was also designated the PAC-12 Conference Champion in renewable energy purchases and a member of the Green Power Leadership Club.  The source of OSU's renewable energy is wind power.  All OSU RECs are Green-e certified. For 2012, OSU made a smaller purchase offsetting about 10% of total electricity use.