The Sustainability Tracking, Assessment & Rating System is a set of peer reviewed, standardized indicators that measure and help manage our sustainability efforts.

It is a transparent, self-reporting framework for colleges and universities to gauge relative progress toward sustainability, developed by the Association for the Advancement of Sustainability in Higher Education (AASHE) with broad participation from the higher education community.  STARS is designed to: 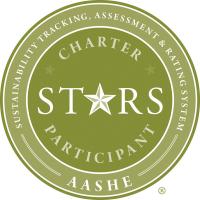 As an early adopter, OSU is a charter participant in the STARS program.  We continue that leadership today by being one of very few institutions to perform a campus wide assessment every year.  In fact, in 2021, OSU became the first institution to submit 11 STARS reports! This assessment process aligns with guidance and directives from university leadership and also supports OSU's climate initiatives and Strategic Plan.

When the STARS Pilot began in 2008, OSU understood it could be a game changer in measuring and managing sustainability within higher education. In the summer of 2010, the Sustainability Office began the data gathering process for OSU's first STARS submission.  This included identifying stakeholders throughout campus that have access to information needed to complete STARS reporting.

On January 31, 2011, OSU submitted its first report for Fiscal Year 2010 (July 1, 2009-June 30, 2010).  OSU was the first and only school in Oregon to submit its STARS report on time, by the January 31 deadline.  This deadline was for the first round of STARS participants and since then, deadlines have been removed so schools can report when convenient for them. Princeton Review and the Sierra Club, however, have their own deadlines and rely on STARS data.

With our FY20 report submission, OSU became the first institution to reach a 10-report milestone, and then was first again to reach 11 in 2021!

Each time since 2011, OSU has attained a Gold rating in STARS.  It was the first school in Oregon to submit a report.